Still Life with Banquet is a result of a collaborative effort between multimedia artist Grahame Weinbren and Katherine (Kitty) Greenwald. High resolution images of lush and vibrant still lives resembling paintings of the Flemish, Dutch and Spanish artists were displayed on large format screens at a fundraiser, a precursor to the opening of the 2010 Zero1 SJ Biennial, and part of the Build Your Own World program.

Inspired by the contradictions present in the 17th and 18th Century sill life paintings, Grahame Weinbren took on the challenges of translating them into contemporary context with the use of current digital technologies. 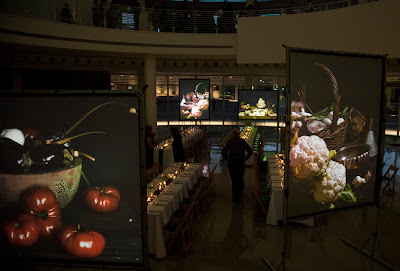 Taking delight in each course of their meal made from the same organic ingredients used to create the still lives, as well as for table decorations, and feasting their eyes on the images, event patrons would get the opportunity to contemplate the passing of time and observe the ecological process of decomposition of those elements. They would also get a sense of what happens behind that process.

Every project has its ups and downs. SLwB nevertheless, was plagued with a variety of challenges all throughout the image production phase.

However motivated and eager to begin, the start of the project was emotionally and physically demanding for Grahame when he experienced the loss his father.

There was an involuntary and complete shut down of the first phase two weeks into the project.

While full of admiration of Still Life with Banquet, the studio management was anxious and reluctant to accept the unjustified risks (toxic mold - one example) they associated the project with. Willingness to work with the artist resulted in an alternate solution. At that point however, the sense of adequate continuance of the project was compromised. 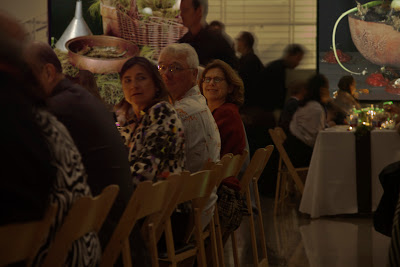 After painstaking efforts (carried out in the midst of a heat wave and without air control) to follow very specific studio design and construction requirements of the management, a second take of the project was initiated and continued until its scheduled production phase shutdown of three still lives by August 15, 2010.
Although expected given the rich source of nourishment we provided, we were taken a bit by surprise to notice an invasion of guests that were not invited to the table. Looking over the project almost every day however, required all living members occupying the studio at the same time, at any given moment of the day, to co-exist in cautious harmony and acceptance.
A car accident trumps the list of challenges.

Despite the many confrontations that nearly prevented the completion of the project, a stunning Still Life with Banquet by Grahame Weinbren and Kitty Greenwald took place on September 14, 2010 at the San Jose City Hall Rotunda.
NEXT PAGE
Back
contact
Email ThisBlogThis!Share to TwitterShare to FacebookShare to Pinterest
Pervious SLWB Event Home
Subscribe to: Posts (Atom)